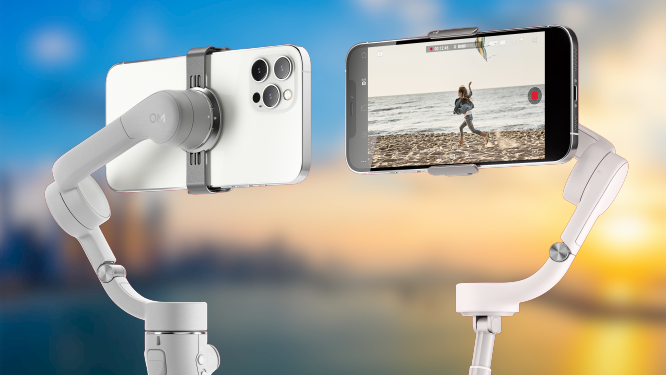 Along with its famous consumer drones, DJI has established a presence in the smartphone gimbal industry. Over the years, its portable stabilizers – formerly called ‘Osmo’ – have allowed some rather sophisticated features.

However, with smartphones’ built-in stabilization becoming so excellent, do we really need an extra gimbal? The DJI OM 5 includes enough intelligent features to justify its purchase, especially if you’re an avid blogger.

DJI has taken some of the best concepts from the previous OM 4 and reduced the size, all while concealing a party trick: a selfie stick. They were all the rage a few years ago, and DJI has chosen to include one into its most recent smartphone gimbal.

Regrettably (but logically), this is not a powered feature. As a result, you cannot push a button and have it immediately stretch out. Rather than that, you must manually draw it to the appropriate length. We can’t believe that the extra motors and complexity needed to create a motorized version would be worth the weight and cost increase.

The extension adds about 25cm of space between you and the camera, allowing for broader views with the front-facing camera whether filming vlog-style videos for social media or just snapping selfies.

From a design perspective, the stabilizer has lost its previous model’s angular appearance. Rather than that, the OM 5’s handle is a near-perfect cylinder, with a dip on the rear grip that is ideally designed for tucking the mount and arm away when folded for storage. Additionally, the arm has been made slimmer, and the hinge has been relocated up the arm.

This change in shape is purely cosmetic, as the OM 5 retains all of the device’s standard buttons and controls around the top: the directional joystick, record/shutter button, index finger trigger, and directional switcher button are on the front; the zoom slider and power button are on the left, and the Type-C port for charging is on the right.

While the shrinking makes sense from a mobility standpoint and the extending arm provides flexibility, there is a very clear feeling that it has come at the expense of durability. The new gimbal seems less robust and substantial than its predecessors, and the buttons’ hinges and moving components also feel a little more fragile. It most definitely does not feel as well-put-together.

Regardless, the manufacturer maintained the OM 4’s greatest feature: the magnetic phone attachment mechanism. Rather than wrestling with grips that are permanently connected to the arm, the phone clamp detaches through a magnetic mechanism. This way, you can easily put it onto your phone and then snap it in place when you’re through.

Additionally, this enables DJI to provide a new extra clamp with integrated LED strip lights on the grips. It’s called a Fill Light, and it allows you to photograph yourself in the dark by completely lighting your face. It is an optional accessory, however, it has a built-in battery and a USB-C charging connection.

How do use the controls?

When you initially power up the OM 5, you must hold down the power button for a few seconds. It’s a technique DJI has employed on its devices for years and prevents you from inadvertently turning on or off your drone or gimbal.

Then you download the DJI Mimo app and follow the on-screen instructions for setup. It connects with the OM 5 through Bluetooth, and then the phone and grip interact wirelessly.

Some of the physical buttons serve only to regulate the OM 5’s arm movement, while others really control the phone’s recording. For example, the zoom slider on the left enables you to zoom in and out easily. If your phone has several cameras on the back, it will automatically swap between them.

For example, if you drag downward on an iPhone 12 to take a wider picture, the camera will switch to the ultra-wide lens. On the iPhone, this transition is not entirely seamless; there is a brief delay as the camera changes to the secondary lens, requiring about a second to load the view from the secondary camera.

You can start and stop recording (or snap a picture) by pressing the red shutter/capture button on the front of the grip, or you may use the red button on your phone’s screen. The joystick enables you to move the arm left and right or up and down manually and smoothly to frame your shot.

It has a very wide range of motion from left to right, which enables you to pan pretty far. Regrettably, the upward and downward motion is not nearly as far-reaching. It may be pointed straight upwards or downwards, but only a few degrees downward with the handle erect. That implies that if you want to capture a top-down picture, you must either hold the camera and aim it downward manually, or attach it to a frame or arm.

The OM 5’s other physical control is a tiny trigger on the front. When a subject is clearly visible, pushing this button once activates the ActiveTrack function (which actively tracks subjects inside a frame regardless of their or the camera’s movement), whereas pressing it rapidly twice re-centers the camera so it faces forward again. Additionally, you may push and hold it to provide a quicker reaction from the arm while manually moving the camera.

The retail package includes a little tripod, a bag, and a wrist strap.

The DJI OM 5 is now available for the same price as the DJI OM 4, $159/ £139/ AU$239. Unlike previous versions of DJI’s smartphone gimbal, the OM 5 comes included with a small tripod, bag, and wrist strap, which helps explain the somewhat higher price.

While the package includes a metal clamp, if you’re a YouTuber or someone who requires precise selfie lighting, you can also purchase a Fill Light Phone Clamp for $59/£42/AU$79. While it is much more substantial than the magnetic clamp, it includes a bright light that works at three different strengths and temperatures.

As is usually the case with a DJI product, the automation and tracking capabilities are what make it so appealing. Much of this is similar to what was found in earlier generations. Indeed, the OM 4 shares the majority of the characteristics of the OM 5.

The motion time-lapse function is the one automatic program that has probably the greatest visual effect and is something you cannot simply accomplish with just a phone. You place the OM 5 on the supplied attachable feet – or mount it to a tripod – and activate the app’s Timelapse mode.

At the very bottom of this menu, you may select between a basic fixed shot, a straight pan left to right, or a straight pan right to left. However, there is a custom route option that allows you to specify the start and finish locations, as well as any additional places in between (up to four in total). When you press record, it will automatically follow the route you created. All you need to do now is wait for it to complete.

However, ActiveTrack has been enhanced this year. It supports a broader range of resolutions and frame rates. Additionally, it is more responsive, allowing it to deal with somewhat quicker moving objects.

It works fine for the most part. When you use the selfie camera, it detects and tracks your face automatically. As a result, as you move, the arm carrying the camera moves to maintain a central position for your face. That is, whether you are moving or the camera is moving. It’s the same as photographing another topic, except that you must manually tag a person, pet, or item in order to keep track of it.

This is very simple since it just merely drawing a square around the topic with your finger on the phone’s touchscreen. It performs well in low-light situations. The only time it struggled was when an item was obscured from view or moved too fast for it to keep up with. Or, if the subject approaches the camera too closely and consumes too much of the available frame area.